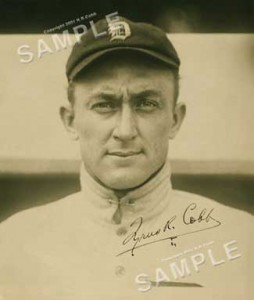 This photograph was taken at the start of Ty Cobb’s career, either 1907 or 1908. By that time, a mere three years into major league baseball, he had become a favorite of the fans and Detroit’s Bennett Park was drawing more and larger crowds. This photo is rare and made even scarcer by the signature “Tyrus R Cobb.” He signed most autographs “Ty Cobb.”  His determination can easily be seen in his eyes and face. The beginning of his baseball career was personally difficult. His father was killed by a gunshot wound during his first year (age 18, 1905). He was vying for a spot in the Detroit outfield, replacing a veteran, and was isolated from his teammates by his southern origins and his aggressive baseball play. At the age of 18 and 19, he was fighting for his livelihood with grown and experienced men. His personal bats were sawed in half, his uniforms cut to ribbons, and he was locked out of the team bus as it went to the park by his new teammates.

This reproduction is on archival paper and the edition is limited to 420 copies. In 1911, he batted .420, the first of three times he would bat over .400 (.410 in 1912 and .401 in 1922 at age 36). The print size is 8½  X 11 inches. I’ve signed and numbered each copy. The original was given to me by Cobb’s oldest daughter and my aunt, Shirley Cobb Beckworth.  I had often admired it when it was hanging in my Grandfather’s office at his home in Atherton. Shirley knew this and when he gave it to her, she gave it to me. 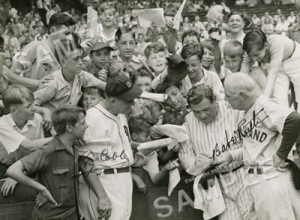 “This photograph was taken an exhibition game shortly after Babe Ruth retired, probably in 1938 or 1939. Ty Cobb wears the uniform of Detroit, Babe Ruth wears New York, and Tris Speaker wears Cleveland. My Grandfather gave the photo to me during the summer of 1956 while I was with him at his cabin at Cave Rock, Lake Tahoe, Nevada. I have never seen this photo reproduced before, and, to my knowledge, this is the first time it has been published.”

Note the expressions on the faces of the boys surrounding the players. It’s quite a joyous picture.

This is a limited edition. During his career, Cobb produced 1938 runs batted in (RBI’s) and that is the number in this edition. The original photo is approximately 9 X 10 inches and this reproduction print is 11 X 14 inches. The print is on archival paper, designed to last well over 100 years. I number and sign each print and include a signed letter describing the piece and its history. 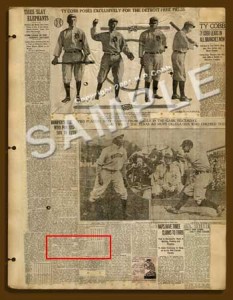 My Grandfather, Ty Cobb, kept two personal scrapbooks during his playing career. I received one from him early in 1961, shortly before his death. My scrapbook covers his playing years 1909, 1910, 1911, 1912, and part of 1913. The news clippings were garnered from local and out of town newspapers. This page, page 14, has clippings from September 1911, toward the end of the season. It also has a wonderful set of pictures.

This reproduction is a Limited Edition, only 892 copies printed. Cobb stole 892 bases during his career, and held that record for over 50 years. It is exact in size, color tone and content as the original. The print is on acid-free archival paper (100 years+). I number and sign each print and provide a signed letter describing the piece and its history.

The articles capture his skill and dominance as a player, and provide a taste of the excitement he provided the fans and the game. In 1911, Cobb was 24 years old. 1911 and 1912 were arguably his best all around years. In 1911, Cobb spent much of the season in a fierce battle for the batting championship with “Shoeless” Joe Jackson and Nap Lajoie. Cobb won the championship with a batting average of .420. Jackson ended up at .409 and Lajoie dropped to .365. That year, Cobb also had the most runs (147), most hits (248), most total bases (367) most RBI’s (127), most stolen bases (83), and was named the MVP of the American League. Frank Baker (Home Run Baker) hit the most home runs (11).  During his playing career, Cobb, at one time or another, held over 90 baseball records.

The original of this photo was taken in 1928, at the end of the long and distinguished careers of Ty Cobb and Tris Speaker. Speaker began his career two years after Cobb began and the two of them battled for the American League batting championship many times. Although they were baseball adversaries, Cobb had the utmost respect for Speaker and often spent time with him during the off-season. In 1927, Connie Mack was rebuilding his Philadelphia Athletics in a major effort to win the pennant. Cobb was enticed to join the club. The effort failed in 1927, as the New York Yankees dominated baseball. The next year, Speaker joined the Athletics, and the two of them, 40 and 41 years old, roamed the outfield together.

This photo was taken at an occasion honoring Cobb and Speaker when their retirement had been announced.  He gave it to me in 1957, while I was visiting him at his home in Atherton, California. I asked him about his big grin, and he vaguely recalled that his career was summed up in a pithy and humorous manner, slightly poking fun at him. Speaker didn’t look up, but after the photo was taken, turned and winked at him.

To my knowledge, this photograph has never been published before and is not generally available, especially with autographs.

This reproduction is a Limited Edition. The Edition contains 711 prints, which is the total of the career batting averages of Cobb and Speaker (.367 and .344 respectively). The image size is 8½ x 11 inches. It is printed on acid-free archival paper intended to last 100 years plus. I number and sign each print and provide a signed letter describing its history. 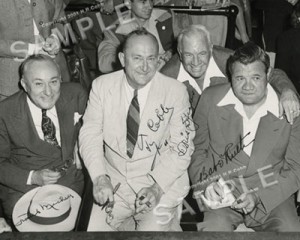 The original photograph was taken at the all star game, 1942. Three of baseball’s greatest players and hitters. Mr. Meckey was a long time friend of my Grandfather. Cobb had a lifetime batting average of .367 (still the record), Speaker’s career average was .344 and Ruth’s mark was .342. Cobb’s magic was his hitting and base stealing. Speaker’s magic was his hitting and fielding. Ruth, of course, hit and hit homeruns. Ruth is known not to have liked to sign photographs and therefore did not sign many. He freely signed balls and other memorabilia. To my knowledge, this photograph has never been published before and is not available, especially with autographs.

Cobb played from 1905 to 1928, mostly for the Detroit Tigers. Speaker played from 1907 to 1928, mostly for Boston and Cleveland. Ruth played from 1914 to 1935, mostly for the New York Yankees. Its interesting to note that Ruth played his first six years as a pitcher in the “dead ball” era and managed to hit 49 homeruns. During the next sixteen years, with the “live ball,” he hit 665 homeruns or more than 41 per year! Cobb and Speaker played together on the 1928 Philadelphia Athletics under Connie Mack. Both men retired at the end of the season. That team had eight (8) future Hall of Famers on it.

The original of this photo is 8 ½ X 11. It was given to me by my Grandfather in 1958 while I was visiting him at his home in Atherton, California. I liked his smile. It was one I often saw.

This reproduction is a Limited Edition. The Edition contains 1,053 prints, which is the total of the career batting averages of Cobb, Speaker and Ruth. The print size is 11 X 14. It is printed on acid-free archival paper intended to last 100 years plus. I number and sign each print and provide a signed letter describing the piece and its history. 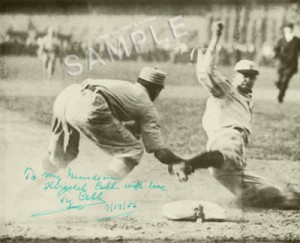 I include this picture primarily because of the inscription to me and the slide into third base. Cobb developed over twenty-five different types of slides, depending on the base, where the ball would be played from (home, right, left, etc.), who the baseman was, who the pitcher was, and what the situation was in the ballgame. Most were variations of his famous “hook” slide in which he exposed as little of his foot or leg as possible and kept as far from the attempted tag as possible. The “head first” slide of today was impossible then. Second basemen routinely landed on Cobb’s thighs with their spikes, hoping to scare him from trying the next time. Sliding in “head first” would have brought major injuries. Stories about intentionally sharpening spikes and spikings should be taken with a grain of salt and in the context of the day. Baseball was rougher. Cobb’s style of play, being daring and aggressive, was to the delight of the fans. Fans were not dissuaded from bigger than life stories. They came to watch him play, whether at Bennett Park in Detroit or on the road. By his fourth year in major league baseball, he was a star. From 1913 to 1920, he was the highest paid player and a favorite of the fans.

Heart of a Tiger
Growing Up with my Grandfather
Ty Cobb

Get it on Amazon